On February 25th and 26th, I had the pleasure of attending the “Agile in Government” conference put together by AFEI (The Association For Enterprise Information). The theme of this year’s conference was Mutual Adaption – Adapting Agile to acquisition and acquisition to Agile.

Roger Baker kicked off the event with the keynote talk on day 1 discussing how to ensure the success of Agile projects.  He had 2 very powerful points:  base the solution on solving the mission and not the technology and what he called ‘Success Makers’ for Agile projects.  Mr. Baker pointed out that he is very adamant about keeping program lengths 6 months or less to root the program in deadlines, which helps to keep things moving.  He also discussed that the acceptable rate of success should be more like 80%, instead of the current 16%.  Mr. Baker’s success factors are to ensure prioritization, impose deadlines, force decision making, and involving users in everything; it “takes a village to move things forward” he notes.  My favorite quotable sentence from Mr. Baker was “Agile is not the answer to everything, but waterfall is the answer to nothing.”

There were a number of speakers that touched on how to use contracts in the government for acquisitions; after all, that was the theme of this year’s conference.  Each of the speakers discussed how there are numerous types of contracts that lend themselves to Agile very well.  One that is becoming more and more popular is that of indefinite delivery, indefinite quantity (IDIQ) which allows for changes through task orders.  These speakers concentrated heavily on the FAR[1] which has been shown support Agile acquisitions.

Another topic that was a headliner was that of EVMS, or earned value management system.  EVM is a management tool and not something that is a day-to-day monitoring tool.  EVM helps to track time and budget at a program level.  The one thing that makes the EVM stand out is that it is really about value; as a couple speakers pointed out, you really have as much time as you need but it is about the amount of value that you need to deliver in a set timeframe.  The easiest way to ensure that the value is kept in check, relevant to the time and budget, is to prioritize.  Prioritization is a point that was continually hammered by each speaker, including those that spoke of EVM.

David Linthicum, keynote speaker on day 2, spoke about how cloud computing is the future for the government.  He pointed out how it not only helps to speed things up but also how it is something that really cannot be ignored if government agencies wish to have systems to be more reliable and scalable.  As with a number of other speakers, Mr. Linthicum pointed out that just switching architecture is not the answer to becoming faster, more reliable, and more scalable; there also need to be things such as continuous integration, automated testing, and the ability to spin up environments at the drop of a hat.  All of these concepts lend themselves to points made that it is paramount to adhering to developing on cadence, releasing on demand.  Mr. Linthicum laid out a number of variables that need to be accounted for when moving to cloud computing and noted numerous times that a change of that magnitude takes time.  He hypothesized that if government agencies began planning to move to cloud computing now, and moved forward, they would be there by 2019-2020.  Another point that Mr. Linthicum drove home is that, contrary to what some think, it is not possible to ‘balance out’ the cost with the savings; there will be a cost to moving, but then savings in things like operations and reliability will be seen long term—not immediately.

Another speaker that was of interest was Mr. Victor Page.  He was from the DSDM Consortium and spoke about how DSDM is an Agile method that is becoming more widely used than it has in the past.  Mr. Page talked about how many believe that, by its name Dynamic Systems Development Method, that it is a method that tells you what to do and how to do it; however, he followed this statement by saying that it is more a framework than a method.  DSDM, as a framework, is more about showing what to do but leaving leeway in how to implement the framework.  Many, according to Mr. Page, are starting to ‘rename’ DSDM to “Driving Strategy; Delivering More”.

I was honored to speak to the group on day 1 about how teams are more than resources and they should be treated as such in a talk titled “Teams Are People Too”. In the 30-minute slot, I outlined how most teams are treated in traditional projects and how that treatment should be shifted when looking at teams in Agile.  I tried to point out how teams should be treated inside an agency, as a vendor-based team, and as a team that is split between an agency and a vendor.

In probably the most enjoyable session of the conference, I had an opportunity to participate in playing a round of the Agile Contracting Strategy Board Game developed by FWD Think.  This game is laid out similar to a cross between Monopoly, Trivial Pursuit, and Trouble.  Each of 4 teams, of 3 people each, roll a monster set of dice and move their ‘car’ around the board.  With each square the ‘car’ lands on, there are questions or challenges that the team must complete.  When a right answer is given or a challenge is completed, the team is awarded money.  Whichever team has the most money at the end of the game (in our case, the timeframe allowed to play), wins.  I found this game to be very helpful in understanding some of the nuances of Agile and acquisitions.  As an aside, my team of 3 won at our table!

As you can see from this short synopsis, there was a lot to take in and a lot to be learned in 2 days.  In all, there were approximately 120 people in attendance.  All-in-all, it was a very full 2 days! 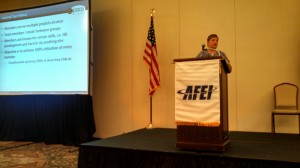