App Modernization – And why it is necessary

What is App Modernization

Legacy application modernization is a process to update existing and aging applications with modern architecture to enhance features and capabilities. By migrating your legacy applications, you can include the latest functionalities that better align with what your business needs to succeed. Keeping legacy applications running smoothly while still being able to meet current day needs can be a time consuming and resource intensive affair. That is doubly the case when software becomes so outdated that it may not even be compatible with modern day systems.

A Quick Look at a Sample Legacy Monolithic Application

For this article, say a decade and half year-old, Legacy Monolithic Application is considered as depicted in the following diagram. 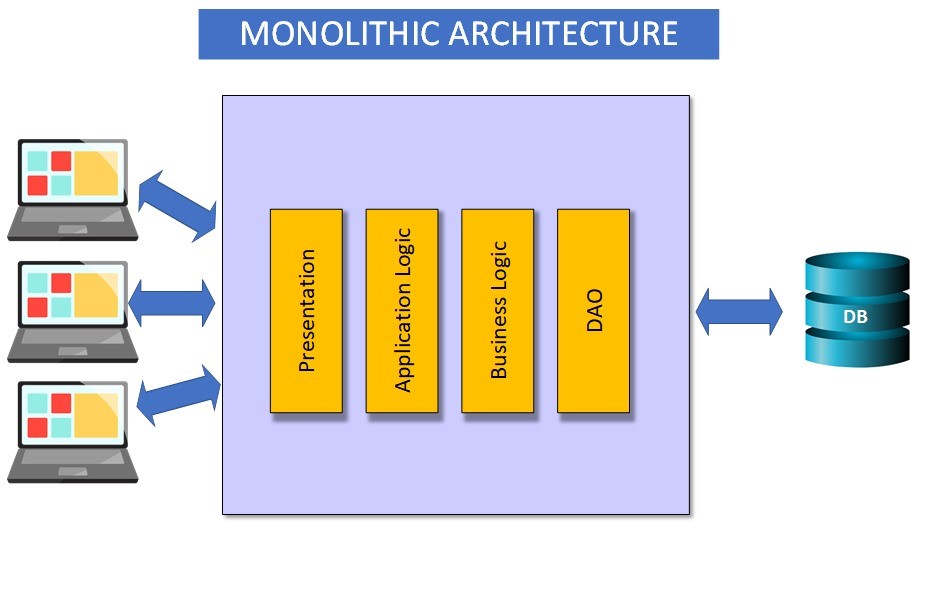 This  depicts a traditional, n-tier architecture that was very common in the past 20 years or so. There are several shortcomings with this architecture, including the “big bang” deployment that had to be tightly managed when rolling out a release. Most of the resources on the team would sit idle while requirements and design were ironed out. Multiple source control branches had to be managed across the entire system, adding complexity and risk to the merge process. Finally, scalability applied to the entire system, rather than smaller subsystems, causing increase costs for hardware resources.

We define modernization as migrating from a monolithic system to many decoupled subsystems, or microservices.

Finally, a modern, microservices architecture is better suited for Agile development methodologies. Since work effort is broken up into iterative chunks, each microservice can be upgraded, tested and deployed with significantly less risk to the rest of the system.

Legacy application modernization strategies can include the re-architecting, re-factoring, re-coding, re-building, re-platforming, re-hosting or the replacement and retirement of your legacy systems. Applications dating back decades may not be optimized for mobile experiences on smartphones or tablets, which could require entire re-platforming. Lift and Shift will not add any business value if you migrate legacy applications just for the sake of Modernization. Instead, it’s about taking the bones, or DNA, of the original software, and modernizing it to better represent current business needs.

Having examined the nightmarish aspects of continuing to maintain Legacy Monolithic Applications, this article presents you with two Application Modernization Strategies. Both listed below will be explained at length to get basic idea on to pick whatever is feasible with constraints you might have.

In this section, we shall take a dig at how re-architecting, re-factoring and re-coding per microservices paradigm will help avoid a lot of overheads of maintaining a legacy monolithic system. The following diagram helps you better understand Microservice Architecture – a leap forward from legacy monolithic architecture. 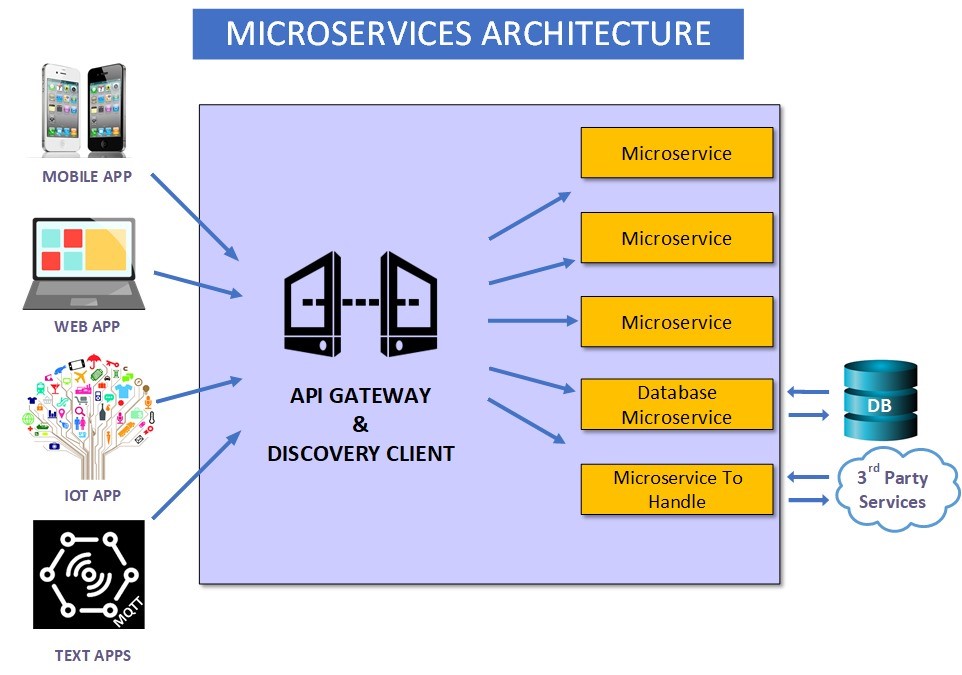 At a quick glance of above diagram, you can understand there is a big central piece called API Gateway with Discovery Client. This is comparable to a Façade in a Monolithic Application. API Gateway is essentially an entry point to access several microservices which are comparable to modules in Monolithic Application and are identified/discovered with the help of Discovery Client. In this Design/Architecture of Microservices, API Gateway also acts as API Orchestrator as it resorts to one Database set via Database Microservice in the diagram. In other words, API Gateway/Orchestrator orchestrates the sequence of calls based on the business logic to call Database Microservice as individual Microservices have no direct access to database. One can also notice this architecture supports various client systems such as Mobile App, Web App, IOT APP, MQTT App et al.

Although this architecture gives an edge to using different technologies in different microservices, it leaves us with a heavy dependency on the API Gateway/Orchestrator. The Orchestrator is tightly coupled to the business logic and object/data model, which requires it to be re-deployed and tested after each microservice change. This dependency prevents each microservice from having its own separate and distinct Continuous Integration/Continuous Delivery (CI/CD) pipeline. Still, this architecture is a huge step towards building heterogenous systems that work in tandem to provide a complete solution. This goal would otherwise be impossible with a Monolithic Legacy Application Architecture.

In this section, we shall take a dig at how re-architecting, re-factoring, re-coding, re-building, re-platforming, re-hosting or the replacement and retirement of your legacy systems per microservices paradigm will help avoid a lot of overheads of maintaining a legacy monolithic system. The following diagram helps you understand a complete advanced Microservices Architecture. 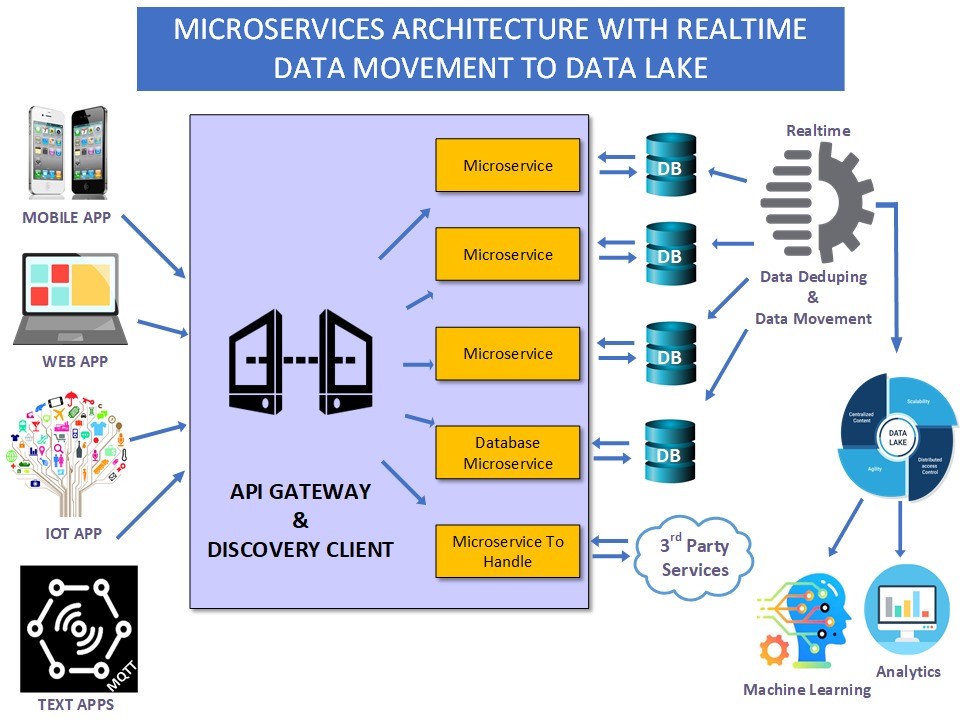 At the outset, most part of the diagram for this approach looks like the previous approach. But this adheres to the actual Microservice paradigm more than the previous. In this case, each microservice is individual and has its own micro database of any flavor it chooses to be based on the business needs and avoids dependency on a microservice called database microservice or overload API Gateway to act as Orchestrator with business logic. The advantage of this approach is, each Microservice can have its own CI/CD pipeline release. In other words, a part of application can be released with TDD/ATDD properly implemented avoiding costs incurred for Testing/Deploying and Release Management. This kind of architecture does not limit the overall solution to stick to any particular technical stack but encourages to provide quick solutions with various technical stacks. And gives flexibility to scale resources for highly hit microservices when necessary.

Besides this architecture encourages one to have a Realtime Engine (which can be a microservice itself) that reads data from various databases asynchronously and apply data aggregation and data deduping algorithms and send pristine data to Data lake. Advanced Applications can then use the data from Data lake for Machine Learning and Data Analytics to cater to the business needs.

Note: This article has not been written any cloud flavor in mind. This is general App Modernization Microservices architecture that can run anywhere on-prem or OpenShift (Private Cloud) or Azure Cloud or Google Cloud or AWS (Private Cloud) 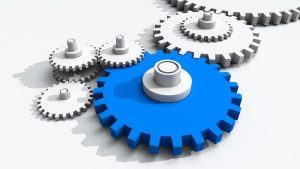