Outside of my work at the MSRB for CC Pace, I enjoy working with community organizations in Fairfax County.  After eight years of running the Jefferson Manor Civic Association, I was named Chairman of the Lee District Assoc. of Civic Orgs (LDACO).  This is an organization focused on improving communications between residents in the Lee District section of Fairfax, and the elected officials and staff of the county.  I have been involved with the board of directors for several years, and was bursting at the seams with ideas on how to build on the foundation I had inherited.

The nearly unlimited options quickly brought about a familiar end result – paralysis.  Ideas ranged from simple house-keeping to epic public festivals.  It was, to be honest, complete chaos.

Thankfully, at the time I was working on my understanding of Agile techniques and how they applied to my work situation.  A key source for this was ‘The Nature of Software Development” by Ron Jeffries.  As the pages flew by, the point of always prioritizing value became clear.  How could this perspective be focused on running an advocacy group for civic associations?  The clouds parted and the way forward became clear.

Prioritize by what would provide immediate value to the organization and its members.  Again referring to Jeffries, I used the “Five Card Method” to determine what our first ‘epics’ to tackle would be.  The idea is pick three to five big ticket items that will provide immediate value, and focus on breaking those down into manageable pieces.

How do we determine what our members find valuable?  Ask them.  A review of LDACO’s contact list showed that it was incomplete and in some cases, outdated.  We had no social media outreach, either.  Improved, direct communication became epic #1.

Talking with leaders in other communities, as well as long standing members of LDACO, I learned that folks needed a longer lead time to plan on attending our meetings.  Epic #2 was to provide a calendar of events with at least 90 days out.

Lastly, LDACO learned that our members wanted a district and county-wide focus for meetings and speakers.  While having a very narrow topic may provide value for a single community, it did not translate to the diverse group as a whole.  Epic #3 was to aim for big, broad topics with speakers who were involved in the decisions that impacted the largest number of communities.

These became the main focus of LDACO’s work for the past year.  These were broken down into smaller, achievable pieces, then worked on and completed.  In the past year, we have grown our communication list, begun to grow on social media, and increased our attendance and membership through meetings with important stakeholders.  All because we kept the focus on what provided value for our customers. 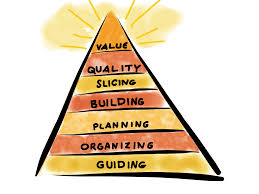