I found Mike Cohn’s posting Don’t Blindly Follow very curious because it seems to contradict what many luminaries of the Agile community have said about starting out by strictly following the rules until you’ve really learned what you’re doing.

In one sense, I do agree with this sentiment of not blindly doing something.  Indeed, when I was younger, I thought it was quite clever of me to say things like “The best practice is not to follow best practices.”  But then I discovered the Dreyfus Model of Skills Acquisition and that made me realize that there’s a more nuanced view.  In a nutshell, the Dreyfus model says that we progress through different stages as we learn skills.  In particular when we start learning something, we do start by following context-free rules (a.k.a., best practices) and progress through situational awareness to “transcend reliance on rules, guidelines, and maxims.”  This is resonates with me since I recognize it as the way I learn things and when I can see it in others when they are serious about something.  (To be fair, there are people that don’t seem to fit into this model, too, but I’m okay with a model that’s useful even if it doesn’t cover every possibility.)  So, I would say that we should start out following the rules blindly until we have learned enough to recognize how to helpfully modify the rules that we’ve been following.

Cohn concludes with another curious statement: “No expert knows more about your company than you do.”  Again, there’s a part of me that wants to agree with this, but then again…  An outsider could well see things that an insider takes for granted and have perspectives that allow them to come to different conclusions from the information that you both share.

I find myself much more in sympathy with Ron Jeffries’ statements in The Increment and Culture: “Rather than change ourselves, and learn the new game, we changed Scrum. We changed it before we ever knew what it was.”  This seems like it would offer a much better opportunity to really learn the basics before we start changing this to suit ourselves. 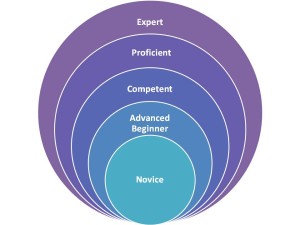