CC Pace 35th Anniversary – Part I. A Reflection on our Past

This year CC Pace will celebrate 35 years of business! CC Pace’s corporate office has been located in Fairfax, Virginia since 1983, and while our address has changed over the years, the foundation in which we built our consulting business on has remained the same.

To share some insight on CC Pace we are presenting a three part blog series about the past, present and future of our company.  To learn more about the early years of CC Pace, we interviewed three of our executives: Mike Gordon, our President, Craig Hughes, the Managing Director of Financial Services Consulting and George Perkins, Director of Staffing.  Here is what they shared with us:

What led you to CC Pace? 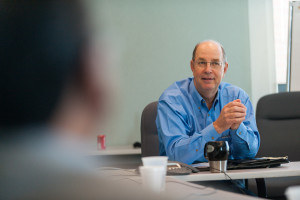 Mike: In the mid-1970s, there was a company called R. Shriver Associates.  Shriver was out of northern New Jersey and they were a financial services technology consulting firm. In the early mid-70s Shriver decided to open up branches in the East and Midwest, including an office in DC.  In 1978, I was hired right out of college as Shriver’s first full time IT person, their initial hires were more business and management consultants.  My plan out of college was to work for a couple of years and then get my MBA, as my long-term goal was to run my own business.  I took the job at Shriver, thinking working for a very small consulting firm would provide me with a broad range of experiences and business insights that I would not get at a larger firm.  By 1980, Shriver decided that the whole branch strategy wasn’t working, so they decided to sell off the DC branch. The branch manager asked myself and one other person at the company if we wanted to purchase the branch which we did, and that was the beginnings of CC Pace.

Craig:  I was solicited by Rich Lichvar, who I had worked with at Freddie Mac (a client of CC Pace’s since 1980). Rich was at CC Pace (then Cabot Consulting) for a while before returning to Freddie Mac.  He called me one day while I was working for Riggs Bank, he asked me to come talk to Mike Gordon and his partners. Ironically, I already knew Mike from playing poker at Barry Krone’s, who was another Freddie Mac contact.

George: I was working with a recruiter at my job that also supported CC Pace. The position I was in at the time was high stress, poorly managed and very numbers driven, looking for quantity over quality.  I had told the recruiter I was looking to leave my current position. He had worked with Mike Gordon in the past, and knew the culture and environment. He told me he felt CC Pace would be a good fit for me.

20+ years is a long time, describe what CC Pace was like when you started.
George: I actually started in Business Development, but within a few months was recruiting full time. In those days, CC Pace didn’t have a recruiter and Freddie Mac was really heating up from a staff augmentation perspective. Mike Gordon asked if I would help out for a while on the recruiting side. Joanie Cassens was running the Freddie Mac account, and I was supporting her in filling their requirements.  At the same time, our Mortgage and Enterprise Solutions groups were beginning to grow, so the need for someone to focus solely on recruiting and finding candidates increased. It was a great time to be at CC Pace, the company was growing and business was expanding. There was a real element of excitement and pride. We had a great mix of a young, energetic and seasoned team members to take us to the next level. The office was very lively, the culture and environment was great.

Can you recall a major client/project from your early years with CC Pace that you feel has had a great impact on our success?
Craig: Sometime around 1989, Bill Lehman and Mike Gordon selected an accounting system for Commonwealth Mortgage in Boston.  That was the start of our work in the primary mortgage industry. Our client there was Mark Thompson, who remains a source of business for us today.

George: Freddie Mac. They have been a client since our beginning; they were the primary influence for the creation of our staffing division, and we have been a Tier 1 vendor with them for the past 35 years.  The relationship we have cultivated with Freddie Mac continues to evolve and remains strong today.  As a result of this relationship many former Freddie Mac employees have referred us to their new organizations.

What was your toughest challenge on a client engagement?
Craig: I arrived at Fannie Mae to start a project somewhere around 1987, only to learn that the project I had been hired for had been cancelled. The manager, Karen Milan, said she was committed to using me for a project and looked over my resume. She said “it says you know SAS, I need someone to develop some reports for me.” I barely knew SAS, having used it only for simple data extraction tasks. I had to learn SAS on the fly, but went on to develop Fannie Mae’s first consolidated reporting system (pulling data from both the IBM and Data General platforms), their statistics-based approach to selecting loans for post-purchase QC and several other cool things. After my contract was up, Fannie Mae went on to create an entire department to continue doing the things I had started.

What has been some of the biggest changes in your industry since you started at CC Pace?
Mike: When I started, PCs did not exist.  We were a mini computer company so our development work and any corporate computing was done on our Data General (DG) minicomputer, which doesn’t even exist anymore. It cost us over a quarter of a million dollars for the DG and it only provided a fraction of the computing that you get when you can buy a PC or laptop today. The internet wasn’t around for commercial use, so the connectivity and the access to information and applications that the internet brings was not available.   The notion of mobile and other personal devices for communicating didn’t exist.  If you were on the road and had to make an important call, you’d go find a phone booth. From a software development standpoint, the adoption of Agile methods has drastically changed how we go about delivering software.

Craig: Constant regulatory change, but the growth of network services integrated into the Loan Origination System LOS has been a huge change to technology.

What do you feel are the biggest technology advancements in the last 35 years?
Mike: I’ll go with the Internet.  It has completely changed how business processes can work, with some changes having wholesale effects on some industries, e.g., travel agencies, book stores.  The application systems that we build now are all web-based with the Internet connectivity providing ubiquitous system access.  The rise of social media, enabled by the Internet, has changed how we think and go about marketing.  When we are trying to answer a business question or find a certain type of provider, we are disappointed when the answer doesn’t pop up quickly from our Internet search.

What about the culture at CC Pace has influenced you to stay here for 20+ years?
George:  In the beginning, it was the people, some of my family’s closest friends are people from those early years at CC Pace.  As CC Pace grew, being a part of a growing, vibrant company made it a very exciting and engaging environment.  Over the years the culture has evolved, but having the ability to make a difference, maintain a work life balance, having a say in where the company is going and how it was going to get there, has remained the same. Mike Gordon has developed a culture where everyone is working towards a common goal.  He has done this by sharing information, having an open door policy, and offering constant support to his team.

What, if anything, do you miss about the old days at CC Pace?
Mike: I miss being downtown, although I don’t necessarily miss the commute to get there.  There are so many interesting places to eat, socialize, and explore, and back then, I had plenty of free time on my hands to do all of those things.  Our original office was a brown stone town house that was on 16th Street, about a block from the White House. The former home of some rich Washingtonian, it was 4 stories high and the various rooms were converted into offices. As the newest employee, my office was in the basement.  What was most interesting about this room is that it had a boarded up doorway that led to a tunnel underneath 16th Street, it went from the old Russian embassy to my office.  During the Cold War, this was the escape route for the Russians if the embassy was ever under siege.  If you ask me what I least miss about those days, I’d probably have to say the lack of office tools.  I can’t imagine trying to write a proposal without a word processor, but we used to write proposals on a typewriter and make corrections using White Out (feel free to do a Google search on White Out if you’re young and have never heard of the product).

We hope that you have enjoyed an inside look on how members of our leadership team found their way here and how CC Pace began.  As you can see this is a company that has and continues to evolve. Stay tuned for part two of our blog series highlighting our 35th Anniversary, where we will be sharing the perspectives of current employees on present day life here at CC Pace.