As a developer, I tend to think of YAGNI in terms of code.  It’s a good way to help avoid building in speculative generality and over-designing code.  While I do sometimes think about YAGNI at the feature level, I have a tendency to view the decision to implement a feature as a business decision that should be made by the customer rather than something the developers should decide.  That’s never stopped me from giving an opinion, though!  Until recently, my argument against implementing a feature has generally been a simple argument about opportunity cost.   Happily, Martin Fowler’s recent post on YAGNI (http://martinfowler.com/bliki/Yagni.html) adds greatly to my understanding of all the cost that not considering YAGNI can add to a project.  Well worth a read regardless of whether you’re a developer, Product Owner, Scrum Master or fill any other role. 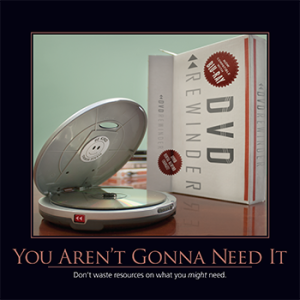