Kirk or Picard as Project Manager?

With Star Trek: Discovery’s television debut rapidly approaching, I can’t help but reflect on the many valuable lessons on project management I took away from the original series, Star Trek, and its successor, Star Trek: the Next Generation. Those two TV series counted on the strengths of their ships’ captains, James T. Kirk and Jean-Luc Picard, respectively, not only to help entertain viewers, but to provide fascinating insights into the characteristics of leadership. In so doing, the shows created timeless archetypes of starkly contrasting project management styles.

Kirk and Picard both had the title “Captain,” yet could not have been more different.  In project terms, both series featured a Starship Captain operating as Project Manager, Project Sponsor and Project Governance all rolled into one.  Yet despite common responsibilities, they were very different in how they carried them out, each with different strengths and weaknesses; one would often succeed in roles where the other would fail, and vice versa.  Each episode was like a project, but on the show, thanks to their writers, each ship’s captain seemed to always get a “project” that they were well-suited for.  But that only happens in real life if someone makes it happen, and most real-life projects don’t have writers working on the scripts.

Kirk and Picard were polar opposites in management style in many ways, and most people involved with project execution have common traits with each. Suppose you are like one of them – are you a Kirk or a Picard? – what should you do to maximize your strengths and minimize your weaknesses?  Suppose one is on your project – how do you ensure they are put to their best use?  How should you be using them and what role should they play?  What would they be good at and not so good at?

To get down to basics, the biggest difference between the two is Kirk is “hands on” versus Picard is “hands off.”

Kirk is clever and energetic.  Because he is “hands on,” he is always part of the “away team” – the group of people who “beam down” to the whatever this week’s show is.  The senior management here is typically the project team.  When additional work was found, he did it himself, or with the existing team.

Picard is visionary and a delegator.  He is more of a leader than a manager.  He set objectives, made decisions and, obviously “hands off,” told Number One to “make it so.” Number One led the project team; Picard rarely went himself.

The best use of a Kirk is as a project manager with delegated authority on a short-term project with a fixed deadline, like a due diligence effort requiring the current situation to be assessed and a longer-term plan of action defined to address deficiencies.  Kirk’s style and authority allows the team to move quickly; if additional tasks appear, Kirk will summon enough energy to get himself and the team through it.  When decisions need to be made, he makes them.  He will shine.  But on a long-term project, if there is additional scope discovered (and there always is), Kirk will become a martyr, skipping vacations and asking his team to do the same.  He will fail at some of his primary tasks – staffing the project properly, as example – and will inadvertently overestimate the current state of the project to his stakeholders, and underestimate the risks.  Here again, it only works on TV.

The best use of Picard is as a project sponsor – he has the vision and needs you to implement it.  The trick will be keeping him involved.  On a short-term project he wouldn’t be your first choice for a PM – unless it was a subject that he cared deeply about – because he might delegate without being very involved.

If Number One got into trouble, but didn’t know it (e.g., the boiling frog parable: as the water heats up, the frog never notices until it is too late), Picard wouldn’t be providing enough oversight to know it either.  Or, if his insight was needed, then there might be a delay while waiting for him to decide.  On a long-term project, the project will need strong oversight to monitor progress and ensure engagement.  That way Picard can keep the team focused on the right things.  Picard could also be a PM on a long-term project like a process transformation.  If there was a new requirement, it would never occur to him to try and do it himself – he would go to the sponsor to explain the tradeoffs of doing or skipping the new requirement, and get the right additional staff to do it.  His management style is great for delegation and building a team, as well as developing the people on that team.

I know that both Kirk and Picard have their fans, and their project management skills both work on TV and in movies – but because there they always the type of project to work on that suits them, as the writer made it be so.  In real life you need to be more flexible in how you use them, and apply the right one, or at least the right traits, to meet your business objective. Understanding this, and acting accordingly, may be as close to having a script writer for our projects as most of us will ever get. 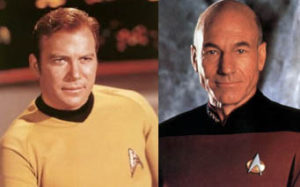