You’re driving along on a four-lane freeway.  For a football field’s length in front of you, there are no cars.  And behind you, a similar distance is free of traffic.  It’s like you’re all alone – I know, I know, for some of you that seems an impossibility, but go with me here.

It’s about 10 o’clock on a bright, sunny Monday morning and you’re headed up the east coast for a business meeting a few hours away.  There are big fluffy clouds in the sky, you’ve got the sun roof open, your music is blaring, and you’re singing along – not well, but nobody can hear or see you, so who cares?

The speed limit is 70 mph, and you’re in the third lane from the right going between 72 and 74, making sure not to go over that magic 5 mph “speed-safe” window.  You’re alert to the situation around you, not rushing to overtake the cars in front of you, yet staying ahead of those behind you.  You’re relaxed, and content with the progress you’re making.  You check the rearview mirror, and suddenly.…

I watch what the car’s doing.  It’s approaching so fast, there’s no way for either of us to safely recover if we both make a move in the same direction.

So I maintain my speed, stay my course, and watch to see what happens.

The car comes right up behind me, so close I can’t see the head lights in my rearview mirror.  And sits right on my tail.

With all this space to go around me, you’re going to sit right on my tail!?!

And what’s with the wiggling back and forth, is that a signal for me to do something?  Maybe a sign that you’re a madman?

What do you expect me to do, move over?

Why should I?  After all, you had, and still have, plenty of room to safely get around me.  It’s not like I’m going slow, it’s just not fast enough for you.  Well, I’m not gonna move over.

But maybe I’ll slow down juuust-a-bit.

A Common Response
My reaction above is considered “passive-aggressive”.  A passive aggressive response is a way of indirectly retaliating or resisting demands made by others.  It’s a subtle way of expressing irritation, anger, or resentment, when we can’t communicate directly with others or don’t know how to express those feelings.

Any of these sound familiar?  They’re are common responses, ones we all exhibit from time to time because they’re easier than confrontation, and require less skill than more positive, assertive ways of expressing ourselves.

While passive-aggressive responses are not the healthiest type of response, as long as it’s not the only way we behave, it can be helpful in the short term especially if there’s a need for acceptance, fear of conflict, dependency, power inequity, or perceived threat.

Consider This
In every organization, there are people who are content where they are, satisfied with the progress they’re making.  They look up one day to check the rearview mirror, and suddenly.…

The change car is right behind them.  Barreling down on them.  Going 2, 3, maybe even 5 times faster than they are.  Urging them to move faster or move to the side.  And you’re driving it.

DANGER!! Don’t Move!
Voila!  There you have it, resistance to change…behavior “that serves to maintain the status quo in the face of pressure to alter it”.[1]

Do you have stories about resistance to change?

Please share…I’d love to hear them! 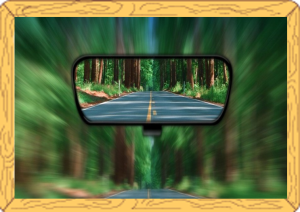