Who is Lord Fairfax?

Who is Lord Fairfax?

The answer: CC Pace Technical Consultant, Christopher Soule!  Each year, members of the Fairfax County community are named “Lords” or “Ladies” Fairfax, an honor presented to individuals based on community service and leadership.  These honorees are named by Members of the Fairfax County Board of Supervisors, and receive their awards at the start of “Fair Week” each June.

Chris received this award because of his exceptional community service!  He has spent close to a decade as the President of the Jefferson Manor Citizens Association, one of the largest and most active civic associations in the Lee District.  In addition, Chris was named chair of the Lee District Association of Civic Organizations (LDACO).  He also represents the LDACO at the Fairfax County Federation of Citizens Associations.

Chris said he has always had an interest in politics and government. That interest led him to the board of the Jefferson Manor Citizens Association back into 2005. The association acted not only as a community building tool within the neighborhood, but as a bridge with the local elected officials at the county and state level.

If Chris is not busy enough, there is even more on his plate.  As a long-time resident of the Route One Corridor, he is dedicated to revitalizing the area.  Chris recently joined the Board of Directors for the Southeast Fairfax Development Corporation (SFDC), a nonprofit economic development organization that promotes redeveloping and revitalizing the Richmond Highway corridor from the beltway to Fort Belvoir. As a board member with years of experience in the civic association world, Chris has had a front row seat to how contentious redevelopment can be.  He knows it can be easy to lose track of the daily life experiences of communities when redevelopment happens.  Chris hopes working with business owners, developers, and local residents that the Route One corridor revitalization efforts will be understood by all sides throughout the process.

Chris will receive his “Lord Fairfax” award during the Celebrate Fairfax fair being held June 5-7. Now the big decision, should he or should he not add “Lord” to his business card?

You can read more about the “Lord” and “Ladies” Fairfax awards at http://www.connectionnewspapers.com/news/2015/may/20/lord-and-lady-fairfax-crowned/

Hard to believe we are almost through the first quarter of 2015!  Since CC Pace likes to participate in at least one charitable event a quarter we have decided to give back to our four-legged friends.  Homeward Trails Animal Rescue is a non-profit organization that provides adoption in the Virginia, DC, and Maryland area.  They find homes for dogs and cats that were rescued from high-kill animal shelters or whose owners could no longer care for them.

Meet Branson, he is 6 months old and amazingly sweet, he will roll over on his side and show you his belly at first meeting. He is a young boy who will melt your heart and wants nothing more than to find his forever home. Branson is just one of many adorable animals that Homeward Trails has available for adoption. 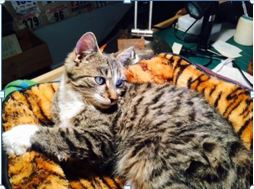 The CC Pace team pulled together and we were able to gather various items to help support this organization’s efforts.  There was even talk of a possible adoption.

For more information about Homeward Trails and their mission you can go to http://www.homewardtrails.org/.