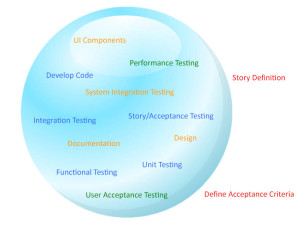 The role of a Product Owner in Scrum includes owning the backlog and preparing stories for sprints. As I work with product owners I remind them that not every item in the product backlog needs to be ready to develop.

Agile backlog and user story progression reminds me of the pyramids.

When we first start, we are at the base of the pyramid. Our customers have such big ideas we call them features. When we start to think more about the feature ideas, we create epics further defining what our customers will want. Those epic stories are still too big to fit into a sprint. So we continue to break them down into small pieces called stories.

As the stories get closer to being taken into a sprint, the story must be small and refined. A good Definition of Ready (DOR) will help us understand when stories are ready to move from the Product Backlog to the Sprint Backlog. The DOR helps the team agree on what must be included with the story in order for the dev/test folks to do their jobs. The basic story and acceptance criteria are required parts of the DOR. In addition, the team will add various items to the DOR list, e.g. wireframes, examples of formulas, and database excerpts.  Product owners should be working on stories they would like to see be developed within the next 2 – 3 sprints.

So in my example here, as stories percolate to the top of the pyramid, product owners review them with the team in grooming sessions. Then at sprint planning, the top stories are pulled out of the product backlog and become the sprint backlog.

The saying “just enough, just in time” helps keep product owners focused on ensuring the right stories get to the top of the pyramid, just in time for the team to work on.

For more information, check out Mike Cohn on the topic:https://www.scrumalliance.org/community/articles/2008/february/writing-the-product-backlog-just-enough-and-just-i