It is said that the President of the United States is the most sought-after interview subject in the world. However, there’s another president just outside of the DC border (in Fairfax, Virginia to be exact) who may feel like a close second, as he’s had quite the interview agenda recently. Earlier this month, the #1 business radio show in the country, Executive Leaders Radio, sat down with CC Pace’s President, Mike Gordon, for an exclusive interview. We recently did the same, and while we may have asked different questions, both interviews unveiled unique and surprising facts about Mike and what it takes to be president… of CC Pace.

So, who is Mike Gordon, really? We asked Mike for 10 minutes where we threw random and fun questions his way to help us gain some insight on our leader. Always a good sport, here are his responses:

How old were you when you got your first real paying job? What was the job?  I was about 10 years old, and I took over a friend’s paper route delivering the Wilmington Morning News.

Who is CC Pace and how often do people ask you that?  Occasionally someone asks me who CC Pace is, but more often the question I get (at least a couple of times a month) is where did the name CC Pace come from.  There is no person named CC Pace. I am happy to share the evolutionary story of how the name CC Pace came to being with anyone who has the time.

Describe your first sale/customer?  The first customer that I supported coming out of college was the Department of Energy (DOE), which was our largest client at the time.  The country had recently gone through an energy crisis with gasoline shortages and the DOE wanted to be better equipped to handle a similar situation, should it occur in the future.  I built a very small system that allowed the federal government to capture gasoline inventories that would be reported by the states in the event that rationing was needed. To the best of my knowledge, the system was never actually used.

Describe the first customer you lost and why?  Ironically, I would say that the first customer that I lost was Freddie Mac.  I had been part of a CC Pace team that had worked on building MIDAS, Freddie Mac’s legacy system.  Over time, I was the only CC Pace person remaining on the project and I communicated to Freddie Mac that this was a sustainable model for us.  When nothing changed, a former director from Freddie Mac who had joined Fannie Mae asked me to bring a team over there to help redevelop Fannie’s systems which is what we did (Like MacArthur, I returned 4 years later).

How many hours of sleep do you get on average each night?  7 (I like to get 8 hours when I can), but invariably there are some nights I only get 5 hours or less.

What is the last book you read?  The Snowball:  Warren Buffett and the Business of Life

What is the last movie you saw in the theater?  American Sniper

How would you describe yourself in one word? Practical

Golf or Tennis?  If golf, what’s your best score?  Tennis in my youth, golf now.  Best golf score on a legitimate course is 78.

What is your favorite restaurant?  Villagio in Clifton, Virginia

What is the best piece of advice you ever got from one of your children?  Don’t sing in public!

Have you ever met anyone famous?  I have met a number of famous people, with the most impressive being Maya Angelou.  She was a long-time supporter of SOME (So Others Might Eat) and I met her at a private reception during one of their annual galas.  When she spoke, her words were so full of imagery, her messages were always so powerful, and her voice was more commanding than anyone else who I have ever heard in my life.

What is your favorite band?  Bruce Springsteen and the E Street Band

Thanks Mike, now we know the boss likes The Boss, can hold his own on the golf course, and has had a great work ethic since the young age of 10!

Want to learn more about Mike Gordon?  You can check out Mike’s segment on Executive Leaders Radio and hear how at the age of 16, he and his brother took over his family’s business – not realizing how much impact that one decision would have on shaping him into the leader he is today. Executive Leaders Radio is the #1 business weekly radio show in the country and is broadcast nationally to an audience of 7 million listeners.

As the Recruiting Manager at CC Pace, I am regularly giving advice on how to prepare for an interview.  More often than not, it isn’t what a candidate says but what they do or how they present themselves can turn a hiring manager off to a candidate. I came across a great image that illustrates some of the most common nonverbal mistakes made during a job interview.  Some surprising statistics are 47% of candidates have little or no knowledge of the company they are meeting with – Wow.  If you take one thing away from this, I would recommend that you take the time to do some research on the company and prepare.  Enjoy the image and perhaps it will make you think about a few things that can positively impact your interview experience! 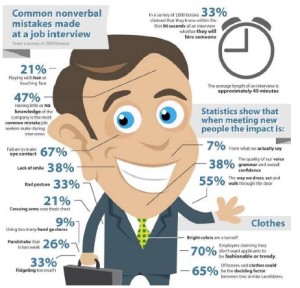