Many times I have seen newly formed or new to Agile teams and organizations moving from Scrum and/or Kanban to eventually settling for Scrumban as they mature. As I reflect on these teams that I have worked with, I feel that their ultimate form of Scrumban is probably their own kind of Shu-Ha-Ri progression.

Shu Ha Ri is a Japanese martial art concept, and describes the stages of learning to mastery. 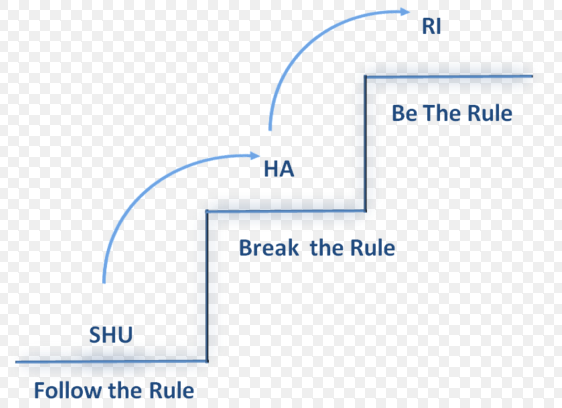 Shu – the student copies the teacher’s moves as perfectly as possible. The teacher corrects the student if the movement is imperfect, inefficient, or ineffectively performed.

Ha – In this stage, the student understands the principles well enough to depart from rigid practices. The student experiments and makes observations of the new techniques. The newly emerged techniques become his own.

Ri – stage, the student has reached a point of mastery and is able to teach and to adapt to new situations easily.

Shu – the journey begins
Teams and organizations new to Agile and in infant stages of Agile transformation start off as being Scrum .They start following all the Scrum practices, conforming to the roles of the Scrum and they kind of follow the prescriptive form of Agile, or Scrum which makes sense. Installing a basic set of proven Agile practices by force can start yielding quick benefits for the organizations, letting them see how the new methodology leads to working faster and delivering the value out to the customer quicker. It kind of builds confidence at the team level too. The teams and the organization are both at the Shu level.

The team keeps having the daily scrums, planning sessions, locking the sprint, reviews and retrospectives in a prescribed manner till it becomes muscle memory.

When a team produces consistent results using rigid methods, they have completed their Shu stage.

As an Organization, these successful practices are also replicated to other areas to see the benefits in the other parts of organization.

Ha – adjusting the sails
With each retrospective and in the spirit of constant improvement, they change the practices to what make sense for their own unique solution. Teams start to feel maybe Scrum isn’t the right way for what they are doing.

Some teams don’t want to be restricted by the lock down of sprint commitment and want to be able to pull their work. Some of the teams want to move away from the planning session or role demarcation but still like the way certain things worked in Scrum and start to work on what is the “Ha’ phase. In the Ha stage, teams often will start to innovate their processes and the way they design their software. They may adopt new methods and tools in dealing with each other. Retrospectives are the key in the Ha stage to gauge the effect of the newly formed processes: are they helping the team or taking them back into the post Scrum era.

The Ha stage will include some successes and some failures, but it will be a learning experiment and the team will be wiser and mature with each of these experiments.

As an Organization starts doing Scrum in various teams and divisions, it becomes clear that one size doesn’t work for all aspects of the software development, and some prescriptive processes which work for majority of teams clearly need more refinement or customization to work for the other teams. This is the organization getting into the ‘HA’ phase. This can be extremely useful for existing Scrum teams looking to improve their scale or capability.

What the discovery leads to is Scrumban, an Agile management methodology that is hybrid of Scrum and Kanban and was originally designed as a way to transition from Scrum to Kanban.

Scrumban is a pull-based system, where the team no longer plans out the work that is committed to during the planning, instead continuously grooming the backlog. The same Scrum meetings (planning, review, and retrospective) can still take place, but the cadence of them can be more context-driven. The main emphasis is on limiting the work in progress (WIP).

With Scrumban, a team benefits from the prescriptive nature of Scrum while the process improvement of Kanban allows their process capability to continuously improve (kaizen) , reducing the waste and simplifying the way they work. In all of this they develop something new and unique to the team and hence get to the “Ri’ stage.

Ri – losing sight of the shore
At the Ri stage of an Agile transition, the team becomes capable of abandoning rules and strict forms while increasing the productivity and customer experience. They can produce quality work, with the rule or methodology of their own.

As an Organization, it might be a new flavor of Methodology which works best for the company itself.