Taking Agility in Government to a New Level

As most of you who operate in the Federal space are probably aware at this point, many Federal agencies are now utilizing Agile methods such as Scrum to manage their software development efforts. The goal for most of them is to reduce risk and accelerate system delivery to their end users. By using Scrum with the development team they have achieved part of their goal. But major risks and speedbumps still exist after the software is developed. These are encountered during deployment by the operations groups and are normally outside the purview of the development team.

The de facto approach to this issue in the private sector is Continuous Delivery and DevOps. That same approach is now being successfully applied to the public sector. Just how well is the government doing in its attempts to adopt this private sector best practice?  On November 18th Dr. David Patton, Federal Practice Director, and Ashok Komaragiri, Senior Technical Consultant, both with CC Pace, will be joined by Joshua Seckel and Jaya Kathuria from the Department of Homeland Security, Tina M. Donbeck from the U.S. Patent & Trademark Office and John D. Murphy, with the National Geospatial-Intelligence Agency, to take an in-depth look at the state of DevOps in the Federal government. 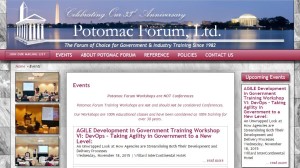