Like Martin Fowler, I am a long-time Doctor Who fan.  Although I haven’t actually gotten around to watching the new series yet, I’ve been going back through as much of the classic series as Netflix has available.  Starting way back from An Unearthly Child several years ago, I’ve worked my way up through the late Tom Baker period.  The quality of the special effects is often uppermost in descriptions of the classic series, but that doesn’t actually bother me that much.  Truth be told, I feel that a lot of modern special effects have their issues, too.  Sometimes modern effects are good and sometimes they’re bad; the bad effects are bad differently than those in the classic series, but at least the classic series didn’t substitute effects, good or bad, for story quality or acting ability.  To be fair, the classic series also has its share of less than successful stories, but the quality on the whole has remained high enough that I keep going with it.  (In my youth, I stopped watching shortly after Colin Baker became The Doctor, although I can’t remember if I became disenchanted with it or if my local PBS station stopped carrying it.  I’m very curious to see what happens when I get past Peter Davison this time.)

I’ve also been very interested to see the special features that come with most of the discs.  As a rule, I don’t bother with special features as I find them either inane or annoying (particularly directors talking over their movies), but the features on the Doctor Who discs have mostly been worth my time.  Each disc generally has at least one extra that has some combination of the directors, producers, writers, designers and actors talking pretty frankly about what worked and didn’t work with the serial.  I’ve learned a lot about making a television show at the BBC from these and also about the constraints, both technological and budgetary, that the affected the quality of the effects on the show.  (Curiously, it also brought home the effects of inflation to me.  I’d heard the stories of people going around with wheelbarrows full of cash in the Weimar Republic, but that didn’t have nearly as much impact on me as hearing someone talking about setting the budget for each show at the beginning of a season in the early 1970s and being able to get only half as much as they expected by the time they were working on the last series of the season.  Perhaps because I do create annual budgets, the scale is easier to relate to than the descriptions of hyperinflation.)

While I am sure there are those are fascinated by what I choose to get from Netflix (you know who you are 😊), I actually had a point to make here.  I recently watched the Tom Baker episode The Creature from the Pit, which has a decent storyline but was arguably let down by the design of the creature itself.  (There are those that argue it was just a bad story to start with and those that argue that it was written as an anti-capitalist satire that the director didn’t understand.)  As I watched the special feature in which Mat Irvine, the person in charge of the visual effects including the creature, and some of his crew talked about the problems involved in the serial, I realized that this was a lovely example of why we should value customer collaboration over contract negotiation.  Apparently the script described the creature as “a giant, feathered (or perhaps scaled) slug of no particular shape, but of a fairly repulsive grayish-purplish colour…unimaginably huge.  Anything from a quarter of a mile to a mile in length.”  (Quote from here.)  I suspect someone trying to realize this would have a horrible time of it even in today’s world of CGI effects, but apparently in the BBC at the time you just got your requirement and implemented it as best you could even though both the director and the designer were concerned about its feasibility and could point to a previous failure to create a massive creature in The Power of Kroll. 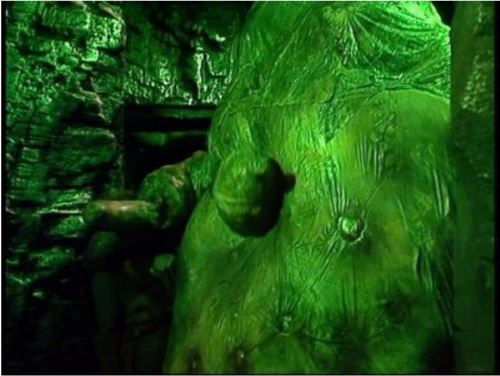 Alas, neither the designer nor the director felt empowered enough to work with the writer or script editor (or someone, I’m unclear on who could actually authorize a change) on the practical difficulties of creating a creature with such a vague description, resulting in what we tend to have a laugh at now.  I don’t know what the result would have been if there had been more collaboration in the realization of this creature, but it seems to me that the size and shape of the creature were not really essential to the story.  Various characters say that it eats people, although the creature vehemently denies this, and we see some evidence that it accidentally crushes people, but neither of these ideas requires a minimum size of a quarter of a mile.  It seems like the design could have gone a different way, that was easier to realize, if everyone involved had really been able to collaborate on the deliverable rather than having each group doing the best that it could in a vacuum. 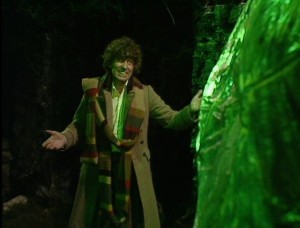