I once read a book, which shall remain nameless, that seemed to have a quota of illustrations per page: an average of one-third of each page covered by an illustration.  It was a horrible read, made all the worse when I realized that the figures were often repeated to illustrate different concepts with only the captions changed. 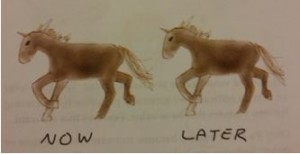 Happily, although Ron Jeffries’ own illustrations manage to cover perhaps an average of a fifth of each page in his new book, The Nature of Software Development, they actually add value rather than just taking up space.  Take the illustrations that Ron uses to introduce the idea of incremental software delivery.  It’s very easy to see how people envision their final product in terms of the magic they believe it will be.

The very next illustration, though, helps us recast our thinking in terms of incremental delivery and how it helps us start deriving value from the product we’re building and then another illustration shows how we can use the feedback we get from the earlier releases to produce something better than we’d originally imagined.  Most of the time I honestly ignore illustrations and diagrams as useless, but Ron’s illustrations are generally thought provoking and I always found myself stopping to think about how they illuminated the text around them. 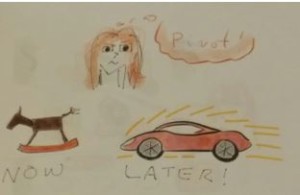 The first part of Nature covers “The Circle of Value,” understanding what value is, why we should try to deliver value incrementally and how we can build our product incrementally.  The second part of Nature is entitled simply “Notes and Essays” and provides more detailed thoughts on some of the subjects touched on in the first part.  One of my favorites was “Creating Teams That Thrive” where Ron reminds us that when the Product Champion, the term Ron is now favoring over Product Owner, brings defined solutions to the team they are less likely to feel a sense of responsibility and pride in the result.

Another nice essay was “Whip the Ponies Harder,” where Ron reminds us that trying to pressure a team into delivering faster can have deleterious effects.  But this brings up a point I wanted to make about the book itself rather than what it says: If you’ve followed along with what Ron has been thinking over the years, in the various discussion groups in which he participates, on xprogramming.com/ronjeffries.com or at the various presentations and classes he’s done, there may not be anything new for you in Nature.  Even if you’re in that situation, it’s probably worth getting the book anyway.  There’s always the possibility that there will be new thoughts for you there, and, even if the ideas themselves aren’t new to you, their presentation in Nature can spur (sorry, the horse/unicorn drawings may be doing something to my language) you to think about them more deeply and also give you a new way to explain those ideas to other people.

A final word of warning: Early on Ron says “[Y]our job is to think a lot, while I write very little.”  This reminded of the time when someone told me they’d read XP Explained (the first edition) in a weekend and understood it all.  After fifteen years, I’m still deepening my understanding of XP, mostly through trying to introduce its values to development groups that don’t necessarily understand what, if any, values they hold.  Even though it’s a short book, give yourself time to really think about what is said in Nature, even after you’ve finished reading it.  That’s when the most reward will come. 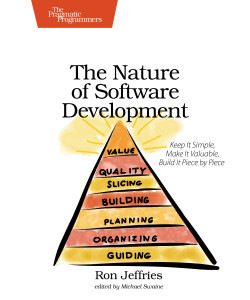