The Season of Giving

In 1970, Father Horace McKenna, S.J. and an interfaith group of priests, ministers, and lay persons founded So Others Might Eat (SOME) to offer food, clothing and health care to the poor and homeless.  CC  Pace has long been a supporter of this exceptional organization; and, CC Pace President, Mike Gordon has been a member of the SOME Corporate Advisory Board for fifteen years.

Each year SOME holds their Annual Dinner Gala and Silent Auction to raise funds for a specific need of the organization.  This year’s funds will benefit SOME’s Capital Campaign to develop a site on Benning Road in DC that will include housing, job training, offices, retail space and a medical clinic. This year’s event was held November 22nd at the National Building Museum with 850 attendees. The evening was full of a very giving spirit with gracious donors and praise for all the important work being done by SOME.  The entire event and silent auction resulted in approximately $1,000,000 of donations.

Highlights of the evening included a touching film featuring Dr. Maya Angelou; and, a tribute to her generous support and contributions to SOME over the years. Each year SOME recognizes members of the community for their outstanding contributions and support with the SOME McKenna Humanitarians of the Year award, this year’s recipients were Ed and Kathleen Quinn. Ed Quinn is the CEO of TW Perry.

Pictured here are CC Pace President, Mike Gordon, his wife Tracy and SOME President, Father John Adams who has directed SOME for more than 35 years. 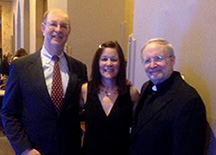