Each year, the notable Scrum Alliance hosts a Scrum Gathering in an energetic city somewhere in the US.  This year, 2015, the Scrum Gathering was held in Phoenix, AZ at the Talking Stick Resort.  During the 3-day conference at the beginning of May, there were many speakers who took the stage in an effort to share knowledge and experience with those of us who attended the conference.

The week started off with a keynote by Mike Cohn.  The basic theme of his keynote was “#ICouldBeWrong”.  During his “Let Go of Knowing: How Holding onto Views May be Holding You Back” presentation, he spoke of how we as Agilists have long thought certain things were either good practice, part of Scrum, or a belief we have held onto for some time.  He talked about how we may have some beliefs which we consider to be known to us as definitive things that are without question.  We also have other beliefs that are just that—beliefs, or things we have heard, seen or thought and hold onto.  We, as Agilists, need to be open-minded enough to realize there is a difference between these two types of beliefs and that some of the things we believe, even those of the ‘known type’, can be questioned and possibly even refuted.  Mike Cohn used an example where, for a long time, he believed that a team needed to be defined and fixed then, after working with a few teams that weren’t, he managed to change his belief to one that said that teams can be more dynamic and change periodically.  The main thing I took away from this session was that some of the things I think I’m doing that are ‘right’ could actually be the ‘wrong’ thing to do; I need to look at each situation with an open mind and made decisions or recommendations based on those situations.

After the opening keynote, I moved on to the session for which I was the speaker: “Everybody Out of the Pool – Agile Teams and Dedication”.  In this session, which was attended by a number of people, I talked about moving from the concept that project teams are built out of resource pools to the Agile mentality that everyone is a person and they all bring something different to the team.

The remaining portion of Monday was spent in various sessions of 45 or 90 mins each.  My most notable on Monday was a session on coaching conversations.  This was a workshop that was led by Martin Alaimo that centered on the Coaching Canvas.  This workshop gave me great insight into better ways to help clients understand themselves by asking the right questions to learn more about their: 1) goals, 2) impediments, 3) facilitators, 4) action plan.  By using the ‘coaching questions’, from the question bank on the site, you are able to better understand exactly what the needs and wants of your client are and how to help them achieve the goals.

Tuesday morning started out with a series of PechaKucha presentations.  There were 10 in all, with a wide range of topics.  I enjoyed this very much as it was just enough to keep my attention; there was not too much detail.  A couple of the notable topics for me were “Getting Your Team from Good to Great”, “People over Process”, and “So You Want to be a Scrum Trainer”.  Each of these presentations caused me to learn things I didn’t know before, or helped to strengthen my understanding of the topic.  One of the presentations that hit the trainer nerve was the “So You Want to be a Scrum Trainer”.  It really pointed out that we are not just ‘lecturers’ but those of us that do Scrum training must really understand our audience and what they need; but more importantly, we need to understand what they bring to the conversation.

Tuesday afternoon was much like Monday in that it consisted of various sessions of 45 or 90 mins each.  The most notable for me on Tuesday was a session led by Bob Galen where we discussed things that were said by coaches, either those in the room or others, that were anything but encouraging to teams.  After hearing how some coaches may say things like “You do it because I said so and I’m the coach” or “I’m the coach, so you know I’m right”, it got me to thinking about the things I say.  While I would never say these types of things, it provided insight for me to think twice about things I would say before saying them and also to help others from making the same kind of mistakes.

The last thing on Tuesday was a session of Ignite Talks.  Beginning on Monday morning, anyone with any particular topic they wish to present posted those topics and the attendees of the conference voted for the topics they wanted to learn more about.  The Ignite Talks on Tuesday consisted of 10 topics for 10 mins each of those selected by attendees.  There were a number of topics that ranged from Kanban to keeping teams engaged.  While there was no one topic that stood out for me, all of these topics were fun to listen to and contained great information.

On Wednesday morning, while most of the attendees were in Open Space, I attended a workshop on becoming a CST (Certified Scrum Trainer).  The workshop was facilitated by 3 members of the CST TAC (Trainer Approval Committee) that are responsible for interviewing candidates for the CST designation.  During the workshop, those of us in attendance were informed about how the process works, what was expected of us, and were given a chance to ask questions of the TAC members.  During this session, many questions were answered from various attendees.  At the end of the workshop, I walked away with a better understanding of the process and how it would apply to me.

During Wednesday afternoon, there was a closing keynote by Jim McCarthy where he discussed the value of freedom in our “software culture” and how we have obligations to push movements forward so that we can design our culture to meet the needs of the many.

Overall, the Scrum Gathering Phoenix 2015 was a great opportunity to catch up with some old contacts and meet some new ones.  I managed to learn a lot and gain insight into myself and my beliefs as an Agilist.

Looking forward to the next Scrum Gathering!!! 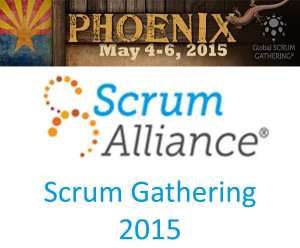