As Wall Street analysts predict smartphone sales will continue to level off due to varying levels of market saturation, does that actually mean smartphone utilization is set to follow? Is the smartphone honeymoon over? Is the saying ‘there is an app for that’ dead? Perhaps the sales of new smartphones are in fact tapering off, but I am a firm believer that ‘utilization’ is just getting started.

Since the turn of the Century, each new generation of trains, planes and automobiles continues to be enhanced in order to increase consumer satisfaction and society’s overall productivity. With each new generation they become faster, easier, and cheaper to run and maintain, and lighter, smaller and in many cases even more luxurious. Why should the smartphone be any different? It has revolutionized how we store, manage and transport information. In the short term, the smartphone has allowed people to immediately ditch the bulky briefcase loaded down with a calendar, address book, calculator, plane tickets, a newspaper and manila folders to that of just a handheld device which simply fits into a shirt pocket.

The invention of the smartphone is on par to that of the automobile. Society’s overall successful adoption of the smartphone has been in an effort to help increase one’s ‘quality of life’. With that said, it’s quickly becoming high noon in the world of business where the lack of an effective smartphone strategy for both customers and employees will likely seal the fate of said business. Most at risk may in fact be the financial services industry, given the volume of legacy systems built and now required to support some of the most comprehensive of services and investment products. The up and coming millennial generation has made it blatantly clear they will adopt those who have successfully adapted. Moving forward it’s incumbent on a business that their success, let alone their survival will be dependent on their smartphone e-strategy. So in reading the following article, it confirmed my belief that the smartphone generation is just getting started.  Read more about it in Strategy+Business, “Radical Intimacy and the Smartphone”.

CC Pace remains committed to helping guide organizations in the development, deployment and adoption of their e-strategies. 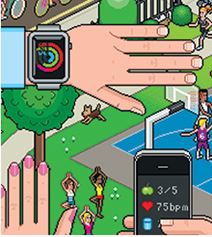