Transforming to a Cross-Functional Team

In a previous blog, “The Reality of T.E.A.M”, I talked about Agile teams being dedicated, or part of a ‘permanent’ team that focuses on a single solution and remains together over time.  Another big factor of an Agile team is that they are cross-functional in nature.

What is a Cross Functional Team?
When the topic of cross-functional teams comes up, there seems to be varying opinions that come out.  What does it mean when I refer to teams being cross-functional?  Does everyone on the team have to be able to do every job?  Do all team members have to know every detail of everything that goes on inside the team?  Does the team have to ensure that they can complete their solution?  Let’s look at what cross-functional means for Agile teams that I work with.

If you want to define it, you will most likely find that it means something like “a group of people with different functional specialties or multidisciplinary skills, responsible for carrying out all phases of a program or project from start to finish.”[1]  If you stick with this definition, you may find that you do not have to have a team where everyone on the team knows how to do every job on a team, but more that it is meant to keep members focused more on their role in moving the product forward than on their title.

Now that you’re on a Cross Functional Team
When the members of a team hear they are to be cross-functional, I’ve seen them get a little uneasy thinking they have to become something they may not want to be or learn to do things they don’t want to do.  I call this their ‘mini identity crisis’ because these team members are so centered around their title defining what they are supposed to do, they lose sight of what it means to be a team.

Team members will hopefully come to understand that becoming part of a cross-functional team means they will be focusing more on their role as a team member than on what their title is on their HR file.  Being a cross-functional team member is about ensuring you chip in whenever necessary and do as much as you can to ensure the solution is complete, and as good and valuable as it can be.

It’s not necessarily important that all team members know how to do everything, but it is important they work together, embracing common Agile principles from the Agile Manifesto and Principles, as well as principles that are found in Agile methods, such as “’Collective Code Ownership’ in Extreme Programming, which ensures the entire team owns the code and ‘Self-Organization’ in Scrum, where the team organizes themselves to get the job done.

Where does an Agile Coach fit in?
When coaching cross functional teams, I try to support and help them understand they won’t be losing their identity, but they are going to become part of a larger solution.  I emphasize that they’re not ‘against each other’, or ‘apart from each other’, but ‘for each other’.  I’ve found it’s important for team members to communicate and collaborate so they feel like part of a team instead of a pool of resources thrown together and asked to feel and behave like a team.

For all you sports fans—A Sports Analogy
Cross-functional teams remind me of football teams.  In football, there are multiple positions, both on the offense and on the defense.  While each member of a football team is most likely drafted onto the team to play a specific position, such as protecting the quarterback, the skills they possess for that position may also translate to other positions on the team.  For example, the player that protects the quarterback can use those same skills to get around the protection of the other team’s quarterback and sack him.  Just like a football team has players who are able to move to different positions in order to win the game, Agile teams use the same idea to produce the best possible solution!

One Response to “Transforming to a Cross-Functional Team” 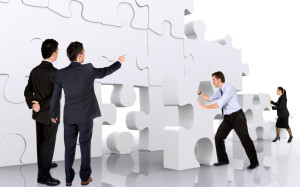