I used to attend Agile conferences pretty frequently, but at some point I got burned out on them and the last one I attended was a 2007 conference in Washington, DC.  This year, when the Agile Alliance conference returned to the DC region, and I decided it was time to give them a try again.

It’s interesting to see how things changed since I last attended an Agile conference.  Agile 2015 felt much more stage managed than in previous years, with its superhero party, the keynotes making at least glancing reference to it (the opening keynote, Awesome Superproblems, appears to have been retitled for the theme, since all the references in the presentation were to “wicked” problems instead of “super” problems), and making one go through the vendor to get to lunch.  It also seemed like there were mostly “experts” making presentations, whereas previously I felt like there were more presentations by community members.  I have mixed feelings about all of this, but on the whole I felt that my time was well spent.  Although I didn’t really plan it, I seem to have had three themes in mind when I picked my sessions, team building, DevOps and craftsmanship.  Today I’ll tell you about my experiences with the team building sessions.

Two of the keynotes supported this theme: Jessie Shternshus’ Individuals, Interactions and Improvisation and James Tamm’s Want Better Collaboration? Don’t be so Defensive.  I’d heard of using the skills associated with improvisation to improve collaborative skills, but the Agile analogy seemed labored.  Tamm’s presentation was much more interesting to me.  I’m not sure he’s aware of the use of the pigs and chickens story in Scrum, but he started out with a story about chickens.  Red zone and green zone chickens, to be precise.  Apparently there are those chickens (we’re outside of the scrum metaphor here, incidentally) that become star egg layers by physically abusing other chickens to suppress their egg production.  These were termed red zone chickens, while the friendly, cooperative chickens were termed green zone chickens.  Tamm described a few unpleasant solutions (such as trimming the chickens’ beaks) that people had tried to deal with the problem, and ended up by describing an experiment whereby the the red zone chickens were segregated from the green zone chickens, with the result that the green zone chickens’ egg production went up 260% while only the mortality rate went up for the red zone chickens (http://blog.pgi.com/2015/05/what-can-chickens-teach-us-about-collaboration/).  Tamm then went on to compare this to human endeavors, pointing out the signs that an organization might be in the red zone (low trust/high blame, threats and fear, and risk avoidance, for example) or in the green zone (high trust/low blame, mutual support and a sense of contribution, for example), while explaining that no organization is going to be wholly in either zone.  He wound up with showing us ways to identify when we, as individuals, are moving into the red zone and how to try to avoid it.  This was easily the most thought provoking of the three keynotes, and I picked up a copy of Tamm’s book, Radical Collaboration, to further explore these ideas.  The full presentation and slides are available at the Agile Alliance website (www.agilealliance.org).

In the normal sessions, I also attended Lyssa Adkins Coaching v. Mentoring, Jake Calabrese’s Benefiting from Conflict – Building Antifragile Relationships and Teams, and two presentations by Judith Mills: Can You Hear Me Now?  Start Listening Instead and Emotional Intelligence in Leadership.  Alas, It was only in hindsight that I realized that I’d read Adkins’ book.  In this presentation, she engaged in actual coaching and mentoring sessions with two people she’d brought along specifically for the purpose.  Unfortunately the sound in the room was poor and I feel like I lost a fair amount of the nuance of the sessions; the one thing I came away with was that mentoring seems like coaching while also being able to provide more detailed information to them.

Jake Calabrese turned out to be a dynamic and engaging speaker and I enjoyed his presentation and felt like it was useful, but that was before I went to Tamm’s keynote on collaboration.  I did enjoy one of the exercises that Calabrese did, though. After describing the four major “team toxins”: Stonewalling, Blaming, Defensiveness and Contempt, he had us take off our name badges, write down which toxin we were most prone to on a separate name badge, and go and introduce ourselves to other people in the room using that toxin as our name.  Obviously this is not something you want to do in a room full of people that work together all the time, but it was useful to talk to other people about how they used these “toxins” to react to conflict.  In the end, though, I felt that Calabrese’s toxins boil down to the signs of defensiveness that Tamm described and that Tamm’s proposals for identifying signs of defensiveness in ourselves and trying to correct them are more likely to be useful than Calabrese’s idea of a “Team Alliance.”

The two presentations by Judith Mills that I attended were a mixed bag.  I thought the presentation on listening was excellent, although there’s a certain irony in watching many of the other attendees checking their e-mail, being on Facebook, shopping, etc., while sitting in a presentation about listening (to be fair, there was probably less of that here than in other presentations).  Mills started by describing the costs of not listening well and then went into an exercise designed to show how hard listening really is: one person would make three statements and their partner would then repeat the sentences with embellishments (unfortunately, the number of people trying this at once made it difficult to hear, never mind listen.  The point was made, though).  We then discussed active listening and the habits and filters we can have that might prevent us from listening well and how communication involved more than just the words we use.  This was a worthwhile session and my only disappointment was that we didn’t get to the different types of question that one might use to promote communication and how they can be used.

Mills’ presentation on Emotional Intelligence in Leadership, on the other hand, was not what I anticipated.  I went in expecting a discussion on EI, but the presentation was more about leadership styles and came across as another description “new” leadership.  It would probably be useful for the people that haven’t experienced or heard about anything other than Taylorist scientific management, but I didn’t find anything particularly new or useful to my role in this presentation. 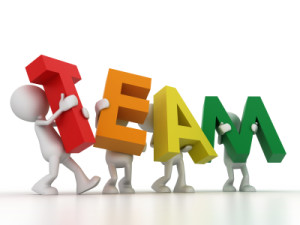