I signed up for Agile, but it sure feels like waterfall. What happened?

Occasionally, as part of our strategic advisory service, I work with clients who don’t want custom application delivery from us, but rather want me to provide advice to their own Agile development teams. Many of them don’t need a lot of help, but perhaps the single issue I observe most often is that iteration (or sprint, in Scrum terminology) planning meetings (IPMs) don’t go well. Rather than being an interactive exchange of ideas and a negotiation between developers and product owners for the next iteration, I observe that the IPMs become 2-week status meetings that don’t accomplish much. The developer team doesn’t have much or anything to demo, there’s little feedback from the product owner, and everyone just routinely agrees to meet in two weeks to go through the same thing again.

Failure to close tasks at iteration boundaries has other implications too, because what it’s telling you is that stories are too big, and stories that are too big have big consequences.

First, big stories are hard to estimate accurately. Think of estimates as sort of like weather forecasts: anything over 2-3 days is probably too inaccurate to use for planning. The smaller the story, the more accurate will be the estimate.

Second, big stories make it harder to change business priorities. That may seem like a non sequitur, but when developers are working on any story, the system is in an unstable, non-functioning state. To change direction, the developers have to bring the system to a stable state where it can be taken in a different direction. Those stable states are achieved when stories are completed and the system is ready to demo.

An analogy I like to use is to think of the system as a big truck proceeding down a controlled-access highway, like an American interstate. You can exit only at certain points. If you’re heading north and you realize you want to head east instead, you have to wait for the next exit to make that direction change – you can’t just immediately turn east and start driving through the underbrush. The farther apart the exits are, the farther you’re going to have to go out of your way before you can adjust. Think of each exit as being the close of a story. The closer together the exits (the smaller the stories), the sooner you’ll reach an exit (a system steady state) where you can change direction.

In this series of blog posts, I’m going to look at what it takes to ensure task closure at iteration boundaries. Each post will focus on a different team role, and how that role can help ensure that iterations end in an actual delivery of working software that can be demoed in an IPM. I’ll write about what product owners, developers, and project managers (or Scrum masters) can do to reduce story size, ensure product stability and functionality at iteration boundaries, and keep the system always ready to quickly change directions – the very definition of agility. 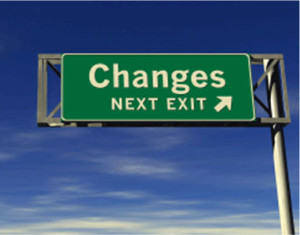